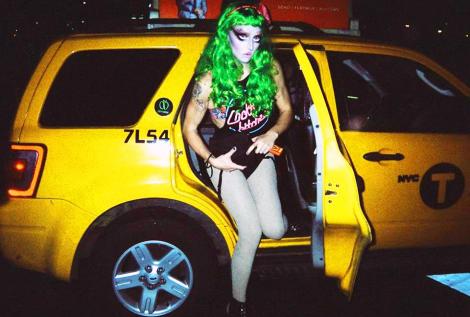 BibleGirl666 is a New York queen who’s slaying the crowds with her quirky looks and killer lipsyncs.

She’s been pictured with plenty of RuGirls and it looks like her career can only go one way: up!

I had a few questions to ask, and she was happy enough to answer them. Check out the interview, below.

Your big eyes are your signature look, but I’ve noticed it’s toned down a bit on your instagram in the past few weeks. What’s happening with that?

Recently I toned it down to try and push myself to become more versatile with looks. Initially the big eyes were an accident where my white eyeliner pencil slipped and I liked the shape it ended up making. It ultimately evolved from there. I digress, I felt that it was time to start pushing myself with new makeup techniques and not get so engrained or in a rut with what I had been doing. Not to worry: the big eyes shall have a comeback soon enough!

You also use very pink toned makeup, giving you a different look. How does not playing by the rules, if you will, affect your drag career?

Going against the grain has allowed my drag career to flourish immensely! In an already subversive industry, if you start doing something even MORE different beyond what it already stands for, it can really be impactful depending on the execution! I like to think that I paint fairly pretty and pink is my absolute favorite color. So I think when you take something that has a really nice aesthetic or look and add an element of surprise (in this case: pink and purple contour) it catches the attention of many and gets people talking.

You’re the face of the Uptown Girl wigs on Rockstar wigs – congratulations! How did that come about?

Thank you! There was a photography project going around from city-to-city titled The Gorgeous Project and I was asked to be a part of it. One of the affiliates of the project was Rockstar, so the owner of the company decided to tap into me!

How do you see your career evolving? Is drag something you would want to pursue full time?

I see my career evolving at such a fast pace that I honestly have no idea what’s next! The fact that I was invited to go and play with the big girls out in Chicago before I had even been doing drag for a year is still mind-blowing and humbling to me. I absolutely want to be pursuing drag as a full time career.

You’ve been pictured with Pearl who is heavily rumoured to be on season seven of Drag Race. Would you ever apply for the show? And, if so, how do you think you would do?

I’m totally planning on applying, and I’m also gearing up for the audition process as we speak! I think I would do pretty well. I have a very clear idea of who I am as an individual (in both boy mode, and as a queen), I have a solidified character and look, and I can sew AKA I’d at least make it past the first episode! ;)